Ragnarok is an ancient term in Norse mythology that basically refers to an event of mass death or "the end of all things," but seventeen films in to its billowing eruption of stories and characters, it would seem that the Marvel Cinematic Universe is a long way from its apocalyptic end. One thing's for sure though, you can only up the spectacle and universe-level stakes so many times, so with the third installment in their Thor series literally named after the end of the world, the question now is how Marvel can keep things fresh and stop this behemoth from collapsing under its own potential weight.

After all, 'Thor: Ragnarok (2017)' not only follows our titular hero (Chris Hemsworth) battle to save his entire home-world of Asgard from the goddess of death (Cate Blanchett), it also sees him thrown to the other side of the galaxy where he pairs-up with the biggest Avenger of all - The Hulk (Mark Ruffalo). So, to balance the scales enters writer/director Taika Waititi - previous helmer of small Kiwi comedies such as 'What we do in the Shadows' and the brilliant 'Hunt for the Wilderpeople,' - who packs an unmistakably hilariously and light punch behind the camera.

Of course, on the surface Waititi is an aberrant choice for a film of these proportions, but bringing him on board has got everyone thoroughly in the mood for another fun, cross-universe adventure from Marvel, and a whole new kind of Thor movie at that. 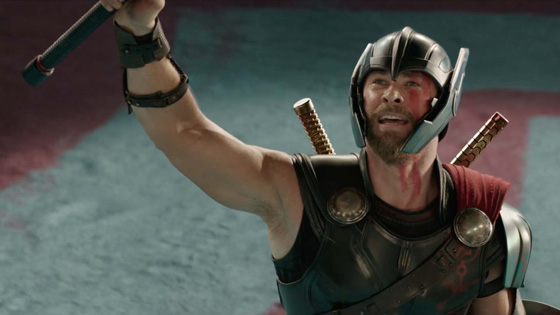 Now we begin with a bedraggled and chained-up god of thunder telling us what a sticky situation he's in - bound and kept by a huge, glowy-orange and very Marvel-esque villain who's naturally delivering an evil speech about the end of pretty much everything. Thor goes on to talk about his forthcoming escape, which falters when his hammer takes a little while to reach him, and then after a bit of punching and kicking accompanied by a spot of Led Zeppelin, he finds he can't get home because Heimdall - the usual bouncer at Asgard's gates - is nowhere to be seen.

It's a very funny, self-referential opening sequence, but most of all it's about subverting expectations. Taika's trying to let us know that this isn't your typical affair, but just when you think things are going to descend head-first into some more mickey-taking and madness, he surprises us again and starts to delve rather more predictably into exposition - albeit in a very snappy fashion.

And therein frankly lies the whole story of 'Thor: Ragnarok (2017).' It's a movie that on the one hand packs an awful lot of brilliant, self-aware Taika Waititi humor, but it's equally one that develops plenty of plot and character arcs in a way you've somewhat seen before. This is arguably important because it invests you in what's going on, but undoubtedly where the movie works best is in its lighter, funnier moments where everyone seems to be enjoying themselves an awful lot. 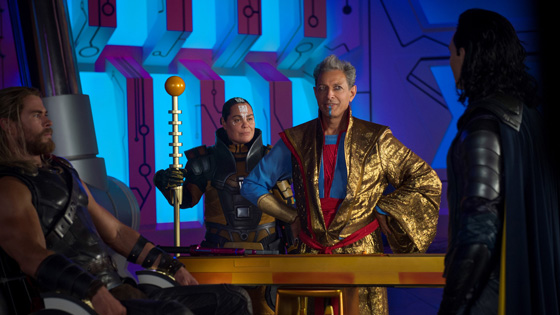 Indeed perhaps the best chunk of the film sees Thor stranded with his brother Loki on the insane planet of Sakaar where the motions of the plot are literally light-years away from what you're seeing so the film can just have fun with itself. The city we see seems to have been plucked right from the pages of an 80s comic book, and so too are the characters - decorated with as much outrageous personality as they are with crazy neon make up (a guise that particularly suits Jeff Goldblum as you get the impression it's probably what he can be seen in on a regular Sunday afternoon).

Here Thor eventually finds himself sparring with the Hulk both physically (as we saw in the trailers) and through the exchange of brilliant self-referential banter that carries genuine weight of its own. And in fact, it's in this brilliantly-realised location that we really get to connect with our characters the most as whilst much of the dialogue takes place in humorous territory, it's all very well-written (perhaps even borderline Edgar Wright stuff) and the performances are excellent so you end up learning more about characters here than in any expositional moment.

That just goes to show that you don't necessarily need to take a break from the fun to engage the audience, and Ragnarok would have definitely benefited from less of a divide between these two things as the more serious moments can occasionally feel a little rushed and throwaway. 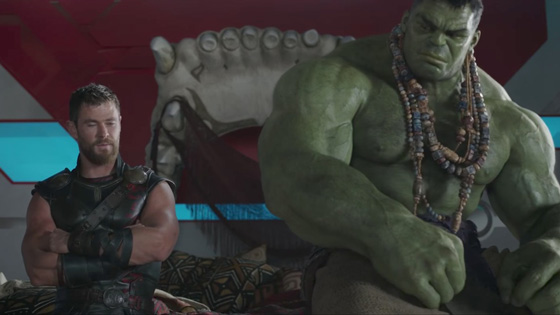 In the end then, 'Thor: Ragnarok (2017)' is indeed a fresh entry to the Thor franchise as Taika Waititi's unique script is extremely funny and emotionally engaging at the same time. Where it falters occasionally is in its briefly isolated serious moments, but overall the film is an absolute joy-ride from start to finish, and definitely sits up there with Marvel's best.

All this studio can do now is sit back and watch the pennies roll in as they work on their next super-fun family adventure that will no doubt make more of the same stuff feel as brilliantly fresh as this thing does. Ragnarok really is an absolute ball, and what’s more, it proves that Marvel’s own Ragnarok is a long way off yet.