"Guardians of the Galaxy Vol. 2" Review

What made the first 'Guardians of the Galaxy (2014)' so appealing - not only to superhero fans but also to movie-lovers across the world - was that underneath all that retro madness there was a wealth of genuinely charming characters and stories to invest in. This year's highly anticipated sequel - 'Guardians of the Galaxy Vol. 2 (2017)' - naturally aims to bring all that madness back, whilst delving deeper into the character side of things as well.

Yes the story is clearly constructed for a crazy and thorough exploration, as it revolves around Peter Quill and the relationship with his newly-discovered space-father as he and many of the Guardians are split across the galaxy.

The funny thing is though, despite all of its human intentions, this second installment often feels less emotionally significant than the first as it leaves you slightly more focused on the meaningless humor and fun, than on the efforts of the story itself. Is that a problem? Well the movie certainly winds up in a slightly different place from its predecessor as a result... 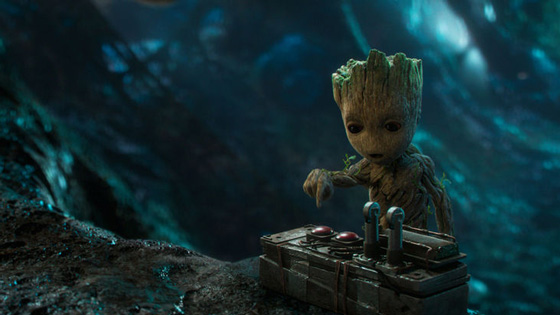 Firstly though, regardless of any problems it may have, this is indeed a film that drives home the fun, and slaps a big euphoric smile across the faces of its audience in the process. Yes not only does the production design drip with even greater levels of glorious, colorful detail, but the comedy and references are also amped up as the brilliant cast - in particular Chris Pratt and Dave Bautista as Drax - return on top comedic form to deliver an experience that is at least, if nothing more, down-right joyous.

Really I suppose its name and disco poster do all the talking there though, as they alone pack all the cosmic elation you'll likely feel throughout the film. One needn't look any further than the opening sequence to see that on full display either, as where else could you find a sprawling battle with some giant space octopus that, just for the sheer fun of it is accompanied by reams of neon lighting, and (of course) a baby tree dancing to The Electric Light Orchestra's Mr Blue Sky?

Yes on that note, the Awesome Mix Vol. 2 - the collection of 80s hits that inherently accompanies the film - probably works even better here than its equivalent did in the first; now featuring songs from Glen Campbell, Fleetwood Mac, Looking Glass and David Hasselhoff to name but a few. 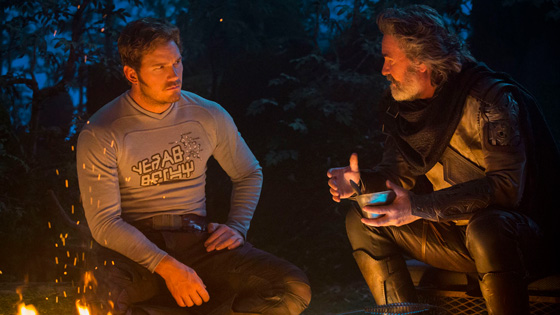 Really then, perhaps the best way to describe this extravaganza is the feeling that James Gunn has been given free-reign of the Marvel household for a long weekend; dripping the place with sweet colors, cracking out the jokes, and turning up Mum and Dad's old vinyl collection to eleven. Largely he throws a very successful party too, as thanks to all that pure joy, the film not only delivers as another amusing Marvel venture, but also as a sequel that succeeds in at least one half of its aims - truly upping the madness.

Unfortunately though, as I said before, that focus on the fun does come at a small cost, and such this second installment often lags behind the first when it comes to the more human side, as the sheer level of overriding giddy excitement can detract from the more important things. In other words, whilst James Gunn lets his inner child loose, he also occasionally has a little too much on his lovingly juvenile mind to give breathing room for the characters and ideas that this story has bubbling under its surface.

There's even one sequence in the film where Quill and his team are embroiled in a battle with space-ships that are remotely piloted like a video-game, which just goes to show how willing it all is to give up on the tension a scene like that would bring in pursuit of fun and games.

It could of course be argued that that that kind of thing is exactly what gives the whole film so much whizzy energy, but when compared to its predecessor; that's a film that for the most part takes more time, packs a simpler charm, and creates more investment in its comic relief as a result. 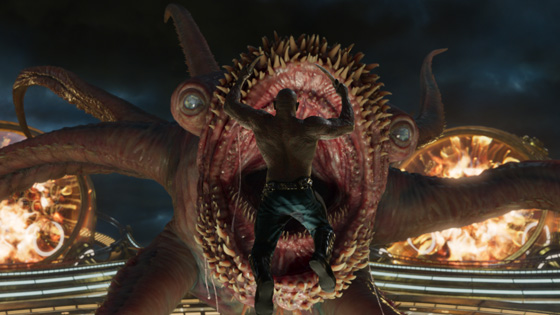 In many ways then, you can also compare the majority of this second adventure with a very lovely and rather tiring small child; delightfully obsessed with having fun, but also not particularly in touch with what's going on around it.

That is the case of course, until it grows up - and there we can begin to talk about the final act, as in an unusual twist of genre-events, Guardians of the Galaxy Vol. 2 is a film that decides to delve deeper and take things more slowly towards the end, rather than amp up the elevens to the twelves.

As a result, the last act is by far the best part of the film, and as we delve to the core of Ego's living planet, we also delve into the emotional core of the film to enjoy the overall balance we had back in the first film once again. 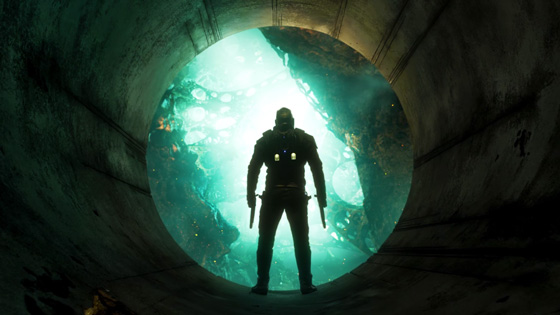 So the very ending will likely have you emotional and excited to see the Guardians when they pop up again, whilst the rest of it will leave you smiling and laughing, if not quite as hooked as you were in the first.

Basically then, 'Guardians of the Galaxy Vol. 2' is most definitely a satisfying and enjoyable sequel, but where it spends its time with the party, it occasionally forgets to properly care for its guests. When you're there, you'll have a ball, but don't for one moment expect the same kind of rounded experience that its largely more accomplished predecessor brought.