There's a moment at the beginning of Wonder Woman (2017) sequel Wonder Woman 1984 (2020) in which a young Diana is told by a fierce Amazonian Warrior that "winning based on a lie means nothing," and that the only way to victory is the truth. Jumping forward to 1984, the villain of the piece (Pedro Pascal) is a businessman and tv-celebrity come rainmaker-type attempting to grant people's wishes whilst secretly taking things away from them.

Debuting in an era of fake news and Donald Trumpism, director Patty Jenkins and Co probably imagined that this would all work together as a powerful statement about truth and honesty beating lies and deceit. Heck, there's even a sequence in the middle act in which Wonder Woman and her love interest kick some ass along the corridors of Reagan's White House, and there's a rather touching side story about the consequences of a South American immigrant being bullied. But ultimately, the central contrivance that unlocks all of this and gives the villain his abilities is a rather convoluted one, and that means the message of the film isn't all that clear-cut and triumphant after all.

The problem isn't that it's hard to suspend disbelief (this is a film featuring Amazonian warriors and a glowing lasso of truth for God's sake), it's that what goes wrong in the movie is more so down to the consequences of granting people's rash wishes than the consequences of lying to them, and the main take-away is thus a somewhat Aladdin-esque message about being careful what you wish for, rather than a triumphant, truth-winning one. Instead of its pseudo-profound thematic attempts then, it's Wonder Woman 1984 (2020)'s joyous, good old-fashioned heroism that will keep your bum in the seat and your eyes on the screen, and frankly there's nothing wrong with that. 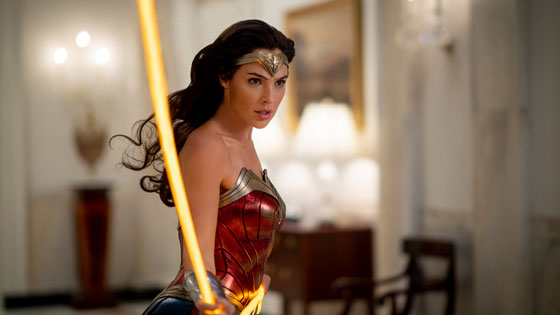 After the opening flashback on Themyscira, we find ourselves in Washington DC surrounded by walls of tv commercials, brightly-lit shopping malls, and people clad in the brightest of lycra where we're introduced to the present-day Diana through a series of beautifully-executed little sequences in which she undertakes small acts of heroism to save individual lives. The smile-inducing stuff then continues with a fish-out-of-water Steve Trevor (Chris Pine) who's magically back from the dead after we last saw him in WW1, and the introduction of Kristen Wiig's brilliantly scatty archeologist Barbara Minerva.

Barbara is a particularly interesting character as she sees Diana just like we do, and as the two of them become friends, it throws up an interesting question about what it is that heroes offer to ordinary people. Diana's abilities allow her to help people in need, but she's also selfless, confident and beautiful - things which Barbara could seemingly only wish for. The choice presented is between tearing the hero down, or using their values and traits to embolden oneself. For the audience at least, Wonder Woman very much has the latter effect.

It's arguable in fact that no other on-screen superhero (perhaps aside from Mary Poppins...) has ever quite represented the ideal that Wonder Woman does here, as her pure acts of kindness and unwavering willingness to help others is brought to life so powerfully by Gal Gadot. Her screen presence is incredible and often moving itself, as she acts so gracefully above the petty arrogance of many of the folks around her, and brilliantly shrugs (and indeed fights) off predatory men throughout the film. What's more, in every action sequence, her focus is on saving each innocent life - something which Patty Jenkins shows off in a very Joss Whedon kind of way with lots of swooping long shots and campy visual effects. 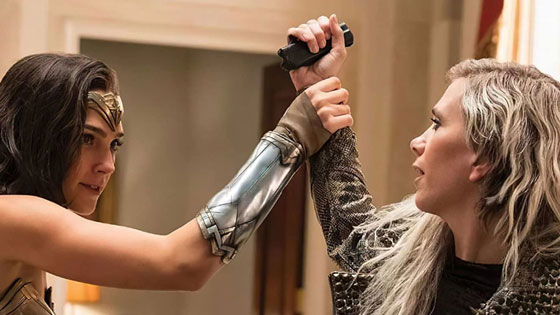 When Diana can't save people it's clearly heartbreaking for her, and one thing the film does particularly well is to temporarily strip her of her God-given powers to bring that out - a task that most great superhero movies must achieve at some point. Here it's another thing handily engineered by the script's central plot contrivance, and whilst that somewhat undermines the emotional integrity of one major thing in the film, it certainly works to put Diana through her paces in an unexpected way.

As a result of embedding that hero's journey then, you'd expect the final act to be a rewarding chance for Diana to rise up again and defeat evil, but sadly the thing she's ideologically fighting against is too muddled for her ultimate aim to pack much of a punch. According to what the script has her say, it's still all about lies, but the truth of the matter is that what she's opposed to is pretty unclear. The bits that work are instead when we see and understand what she's fighting for - to save ordinary people like you and me. 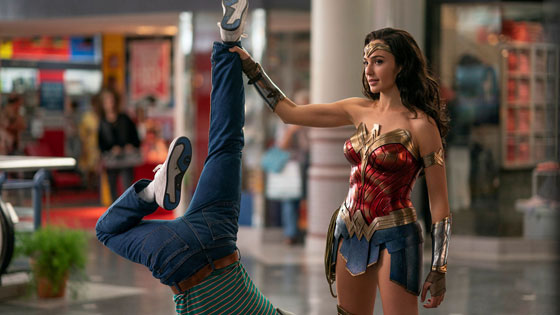 In the end then, Patty Jenkins' Wonder Woman 1984 (2020) is a good-natured superhero movie that aims for thematic depth but falls short with its convoluted central idea. Things may have worked better if it stuck to a more simple and compelling plot like its predecessor, but there are equally more than enough moments of pure, selfless, ideal heroism (which Gal Gadot pulls off better than anyone), and enough well-executed characterisation and joy here to make the sequel a great piece of escapism.

See this not, then, as the complex and profound blockbuster that it's sometimes trying to be, but as a fun, campy and expensive-looking Christmas movie for the whole family to enjoy. With its gaudy visuals and unusually sentimental and classical score from Hans Zimmer, it's certainly a fun one to see at the cinema. So, grab your popcorn and relax for two and a half hours of flawed but heart-warming Hollywood entertainment.