By Jake Peffer | Leave a Comment | Published 2 years ago 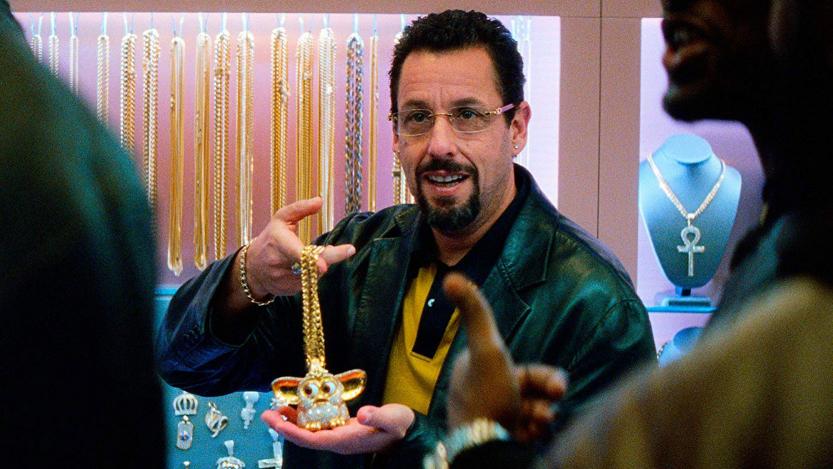 Adam Sandler is an actor who has had an interesting career. He's made numerous comedies that range from arguably some of the worst comedies ever made to some that are actually really good. When he decides to take on roles where the movie's are more on the dramatic side he tends to shine and really show off his acting chops. Even in some of his lesser movies he still has moments where he show cases some of that great acting ability. Uncut Gems (2019) is the latest movie for Sandler to try and prove just how good of an actor he really is and with the Safdie Brothers directing it might just be the perfect match.

Sandler stars as Howard, a jeweler in New York who is always looking for ways to make money. Most of the time that comes in the way of placing bets on basketball games, auctioning off priceless artifacts and pawning off any piece of jewelry from any celebrity he come sin contact with. Recently he's been able to secure a stone that he thinks could be worth millions. Unfortunately for him, NBA star Kevin Garnett sees something in it as well that he thinks could help him in his playoff games. Howard reluctantly lets KG borrow the stone and decides to bet on his performance in the game. The problem here is that Howard has made one too many bets before and owes a lot of different people a lot of money. Eventually, he has to place the biggest bet of his life that could jeopardize his business, his family and his own safety.

Ben Safdie and Joshua Safdie, who previously directed the very underrated Good Time (2017), take their directing skills to the next level with Uncut Gems (2019). They are able to perfectly craft this story together and keep it constantly moving for the entirety of it's run time. At two hours and fifteen minutes this is paced extremely well and because of how well the story is put together it keeps you on edge throughout. The Safdie's are also able to get arguably the best performance to date in the career of Adam Sandler. This character he plays here is so despicable yet has enough charisma that he continually wins you over to the point where you really aren't sure if you should root for the guy or not. A lot of that is a credit to just how good Sandler really is as an actor. When you give him the right role he can really run with it and put his all into that character. The only other time we've really seen this in his career was his performance in Punch-Drunk Love.

The supporting cast that's here puts in some good work as well. There haven't been too many NBA players that have been able to put in quality performances in movies but Kevin Garnett is quite a surprise here. While he is just playing himself he really does do a solid job for it to be his first time acting. Lakeith Stanfield has been on a roll the last few years putting in good performances and he puts in another one here. Idina Menzel does well in her performance as Sandler's wife and Julia Fox gets some moments to shine too as Sandler's side chick.

There really isn't much here to complain about. The opening credits of the movie are a bit off putting as we follow Howard around with very loud music playing over numerous people talking very loud or yelling at one another. Not the best way to open the movie but once you get past that point everything kicks into gear. A scene involving R&B singer The Weeknd also feels a bit unnecessary but it does actually end up playing into something that comes up later on.

Uncut Gems (2019) is one of the best movies of 2019. It's gritty, tense and leads to a gut punch ending. Adam Sandler puts in the best performance of his career and should definitely be rewarded for it. The Safdie Brothers have followed up their previous good movie with something that's even better.