By Jake Peffer | Leave a Comment | Published 3 years ago

Second Act (2018) stars Jennifer Lopez as Maya Vargas, a newly turned 40 year old who is up for a big promotion at the value grocery store that she has worked at for the last 15 years. She is utterly disappointed when she is overlooked for the position and the company decides to go in a different direction, despite her being the best choice. Things change when Maya gets an interview with a company that seems way out of her league. The CEO of the company (Treat Williams) is very impressed with her and her resume, which has been altered by her best friend's son to help give her a leg up in getting a better job. Once she is offered a position she must go toe to toe with Vice President of the company (Vanessa Hudgens) to see who can make the most cost effective product.

There's nothing here that hasn't already been done in hundreds of other romantic comedies. You have a character who gets into a situation caused by a lie and from the moment that happens it's pretty easy to figure out the rest of the beats this movie hits along the way. So what makes this any different from all those other movies similar to it? Surprisingly enough it's Jennifer Lopez.

Throughout her career Lopez has generally played characters who are unlikable or at the very least are uninteresting. Whether that's her performance, the way her character is written or a combination of both there aren't many movies that she's made that really stand out. In this particular movie J. Lo's character of Maya is a breath of fresh air. Her character is given a surprising amount of depth and her performance here is one of the few that stand out in her career. It's nice to see her finally get a role where she can show off a little more of her acting chops. Too bad it's not in something other than a romantic comedy. 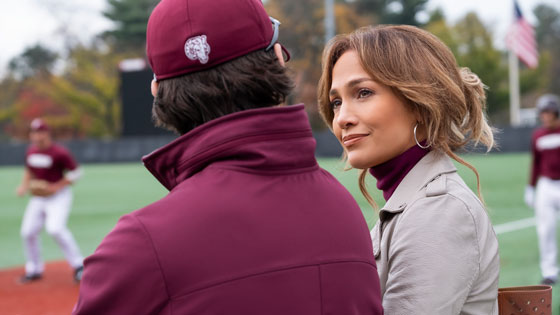 Nonetheless, Second Act (2018) stands slightly above most of the average romantic comedies that have come out over the years. There are some genuinely funny moments here and there, most coming from Leah Remini as Maya's best friend Joan and her family. Despite not having a ton of screen time Milo Ventimiglia gives a solid performance as Maya's love interest and Vanessa Hudgens does a good job in her role as the Vice President of the company that Maya ends up working for. With everything that works here there are plenty of flaws to go around.

Like most comedies there are too many times the movie gets bogged down by subplots involving characters who aren't very interesting. There are too many characters in general that they try to juggle between and a lot of it just ends up not working. About half way through there is somewhat of a twist that adds a new element to the plot. Once this aspect of the plot is revealed it feels like the movie starts to lose a bit of steam through the rest of its run time. It's not anything that completely ruins the movie but it does shift the story in a big way and it never feels like it's for the better.

All in all, Second Act (2018) is a slightly better than average romantic comedy. It's nice to see Jennifer Lopez in a role that really suits her strengths. There are plenty of moments to enjoy but at the end of the day it just doesn't do enough to set itself apart from so many other movies that are similar.

Will you be picking up a copy of Second Act on Blu-ray or DVD? Let me know in the comments below!