The history of cinema is chequered with technical advancements which have each come along at one time or another allowing filmmakers to tell stories in new and interesting ways. There's the birth of parallel editing (as pioneered in The Great Train Robbery) which enabled two simultaneous events to be shown in tandem with each other. Then there's the invention of colour cinematography of course, and more recently things like CGI and motion-capture have drastically widened possibilities. Sometimes though, these technicalities come along and more so prove to be gimmicks than anything else (the invention of 3D for example, or Ang Lee's ridiculous attempts to increase the frame-rate of capture and projection in Gemini Man).

The latest film to pioneer such an advancement is Sam Mendes' World War 1 project 1917 (2019), as it's the first movie on such a scale which attempts to look like one continuous take without cuts or edits. The idea is that this immerses the audience further in what's on screen and puts you on the ground with the characters, and that's a particularly admirable aim in a film which follows the true story of two young soldiers on a seemingly impossible mission across territories to deliver information that will save a troop from certain death. Whether it's a successful technical experiment however is an entirely different matter.

It's not like we haven't seen long continuous takes before of course; recently Sam Mendes himself opened Spectre with a visceral ten-minute tracking shot that followed James Bond through the streets of Mexico City carnival. But it's never before been seen on this scale, and here it has meant that cinematographer Roger Deakins has had to work laboriously with editor Lee Smith to film two hours of footage in just fourty takes and stitch them together into one continuous whole. 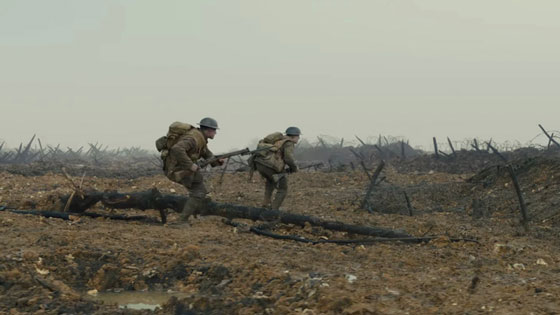 It's an impressive feat, and the first thing to say is that it does at least look like one take (apart from one very overt cut in the middle to signify a small passing of time). But far more importantly, it does also miraculously immerse you in the situation of these characters in a way that's astonishingly intimate. You literally follow them on the ground from the moment they're assigned their task right across no-mans land and into uncharted territory, and that means you not only get to see the realities of the war surrounding them in all of its horrifying detail (also enabled by the realism of the production design), but you also get a unique empathy for the characters' journey.

Indeed, with each and every hardship they experience tracked by an ever-watching eye, there's no cutting away from the grueling nature of their task. In fact, because of that it arguably becomes a film which owes greater debts to man-vs-nature movies like The Revenant - or indeed Joe Penna's recent Arctic - than any comparable war movies.

They're shell-shocked, battered and bruised within an inch of their lives after each physically and mentally exhausting assault, and the fact they make it through proves an incredible testament to man's inherent strength in adverse circumstances. That's given extra weight by the fact it's a true story of course, but it's only enabled by the central performances from George MacKay and Dean-Charles Chapman who sell the hardship and underlying determination to complete their mission perfectly. 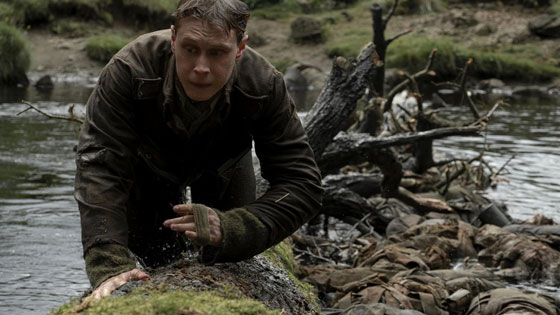 That's a job made all the more difficult by the fact the takes are so long, but it's worth it because without the camerawork it would be half the film it is - simply because the intimacy simply wouldn't be the same. That's not to say the no-edits approach is without its flaws though, as there are a few moments where pans are difficult to follow and are straining on the eye as there's nothing to focus on, and all in all that may have some viewers feeling that a few cuts in select places would have benefited.

Also, it does mean that moments in the story which would usually have been cut have to remain. For example, a large portion of the first act after we learn of the mission is simply spent walking through areas which present little jeopardy at all, and with the characters not talking, things quickly drop engagement. After that though it does have to be said that the film dramatically picks up, and there are thankfully no lets-up in the narrative thereafter.

There are terrifyingly tense moments that will have you gripping your armrests, moments of tragedy that will tug at your heartstrings, and beautifully touching moments of humanity that Mendes directs with all the pathos and nuance you'd expect. And then, throughout all of that changing emotion, you've got the ever-reliable brilliance of a Thomas Newman score that sweeps through the film like a heartbeat - organically rising and falling in response to the film's pace and mood in a way that surely only he could. 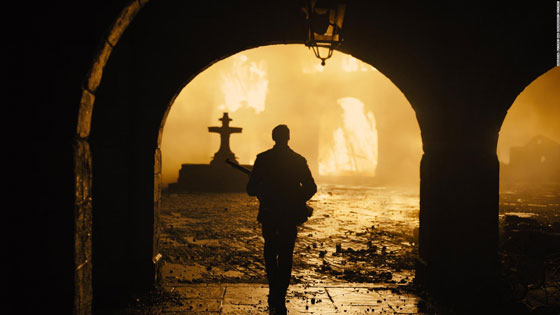 Comparisons have been made to Christopher Nolan's recent Dunkirk there (something which has also been boosted by the most derivative marketing campaign imaginable), but that was ultimately a very different film with a far wider reach. 1917 (2019) is a survival tale - two men going through hell to save lives against all odds, and that's very powerful stuff. It only transcends so perfectly though because that camerawork puts you on the ground through thick and thin with them, and that ultimately means this was an experiment that payed off big time.

Will we see more films shot like this in future? Well, most stories simply don't lend themselves to it, but long, extended takes that never cut away from what's unfolding on screen have now definitely proved themselves as successfully immersive. Roger Deakins deserves his Oscar for the pioneering stuff on display here, and Sam Mendes unquestionably deserves his best director nod too, as delivering this is a huge achievement. 1917 (2019) may go down in the history books as one of those tentpole technical advancements then - not just because it works logistically, but because its achievement makes for a film that works emotionally on a level that very few achieve.

You simply have to see this on a big screen; it's cinematic history in the making that culminates to represent the emotional rollercoaster of tears, joy and terror the cinema should be. What a film this is.