There's something strangely primal about the act of driving a car. Whether it's on the way from Huddersfield to Scunthorpe on a rainy Tuesday afternoon in a battered old Ford Fiesta, or looping a circuit for 24 hours in a million-pound supercar, the extending of your body's every action from feet on pedals to firing pistons and turning tyres can be strangely cathartic for anyone when it all works seamlessly. That's the sensation that James Mangold's Ford v Ferrari (2019) (or Le Mans '66 as it's called in some territories) brings to life as it opens to the thunderous tune of a car racing around Le Mans. The chap in the driver's seat muses that "there's a point at 7,000rpm where everything fades and the machine becomes weightless where all that's left is a body moving through space and time."

That man in question is of course the legendary Carol Shelby (Matt Damon) who we subsequently see - after being diagnosed with a heart condition - quit racing and start building sports cars, only for The Ford Motor Company to then offer him a partnership in their legendary bid for international motor-sport victory against Ferrari. He enlists the help of his friend and fellow racer Ken Miles (Christian Bale), and the journey to win ensues following the real twists and turns of these infamous historic years.

There's engineering triumphs, corporate battles, personal struggles and losses and adrenaline-filled race sequences to be had, but all of those cogs crucially turn together in the pursuit of one narrative pull - the passionate drive for a perfect lap where driver and machine become one. Because of those many ingredients embedded in this story though, even the most cynical of audience members will be fully engaged in that pursuit, and ultimately whether you care about racing or not going into this film, you're bound to be captivated by the end of it. 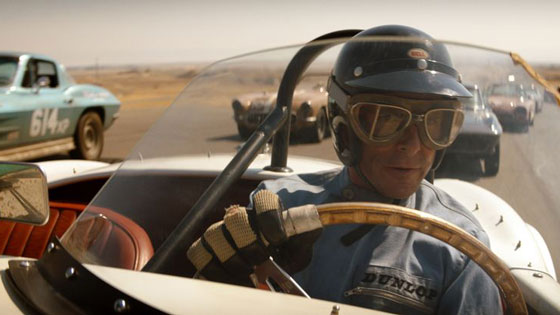 Perhaps the most crucial element that hooks each and every person into the narrative is the character stuff, as the jam-packed script devotes an admirable amount of time to rounding-out the two people at its centre. Shelby is introduced brilliantly in a truly visceral sequence where he's clearly giving every fibre of his being to the track, and as a result when we see him get his career-ending diagnosis, it's pretty heart-breaking stuff. We also understand from this introduction that the chance he's eventually offered by Ford clearly means more than words to him, and the brilliantly committed performance from Damon means you really do get the sense that the race is everything even though he's not the one behind the wheel.

When we first meet Ken on the other hand he's a struggling mechanic who races for the love of it, and it's clear from seeing him giving his all to his racing for the first time that he and Shelby are kindred spirits in their pursuits for perfection and their love for the experience. Ken however is a far more troubled and difficult soul (explained away flippantly by the fact that on the one hand he was in the army a while back, and on the other hand he's just extremely Northern) and along with his on-screen partner Caitriona Balfe, Bale brings that home well - even if much of the dialogue he has to work with is awkward and his chin-first acting steps a little into the realms of caricature at times.

Ultimately though what's really important is that you do properly start to care about the pair, and their shared passion that drives the Ford-Shelby project is extremely tangible. Also, the overall bromance that grows from that is both compelling and often highly amusing as Damon acts as the whiff of American cheese to Bale's gritty English chalk. In fact, it's often in the more comedic moments when the dialogue seems to work best. 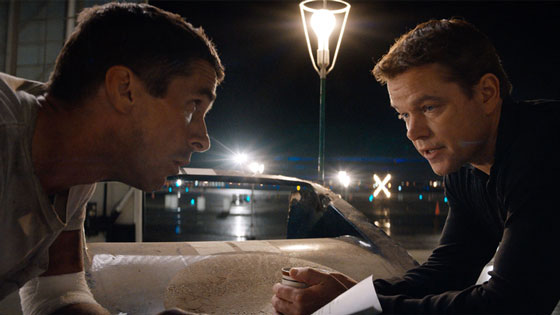 The character stuff is far from the only engaging ingredient in the film though, as the corporate politics with the behemoth of Ford and its brilliantly slimy executives is also gripping - mainly because it serves to disrupt that central drive. There are numerous meetings in which Shelby holds Henry Ford to account for his bureaucracy (and one particularly hilarious scene where he takes him for a spin to persuade him to let Ken drive) and even if some of that stuff is a little grandstanding, it's bound to put a smile on your face and a grit in your teeth over the paper-pushing interference.

Despite all that getting in Ken and Shelby's way though, from their banterous conflicts to Ken's heart-to-hearts with his son, it's clear that the passion for their shared goal is unrelenting, and that's why it's such a good job that the driving sequences here are when the film ultimately comes alive most. Indeed, whenever Ken sits behind the wheel of the latest Ford GT40, his face not so much lights up as it does close down to focus every ounce of his being on the drive, and when the car starts up and gets going you really feel each movement of his feet and every resulting fire of a piston.

Now on the one hand that's thanks to the sound design which takes reconfigured cars with modern engines and makes them sound like the temperamental rockets they were, and on the other hand it's down to the way every test-drive and race is shot. You get up-close and personal with the driver - every bead of sweat and ounce of concentration permeating the camera lens - and you get terrifying views from the front of the car to bring home just how fast it's reacting to Ken's movements too. The results are some of the most visceral sequences cinema could possibly offer that will have you wide-eyed and on the edge of your seat throughout, and the Le Mans race in the final act is the true pinnacle of that - a half-hour display of utter filmmaking mastery that sees all of the character development and that drive for perfection come to a head perfectly. 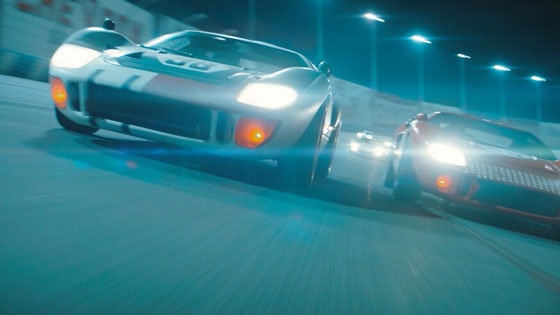 In many ways then this is a film that's strangely rather comparable to the recent Bohemian Rhapsody. A biopic that juggles a lot of ingredients, but one that does a great job of each to make for a film that engages everyone in the character's central passionate aim - here driving perfection rather than musical public service. Also, that all pays off in a stunningly gripping and emotive final act that really does elevate the film beyond brilliance.

There's only one more thing to note about this great piece of work then - and it's more of a warning than a critique. Just be careful that when you step back into the seat of your grey Peugeot in the cinema car park once you've left that you take a moment to remind yourself that you're not Ken Miles and this isn't a Ford GT40. The film is genuinely transcendent after all, so for all the talk about Joker's recent supposed "negative influence," you might want to check yourself with this one before your primal instincts kick that one-litre engine into life and you trundle home down the A46 in the drizzle. It really might feel like a bit of an anti-climax, but that alone is proof of what an excellent job James Mangold and co have done here.

Arresting, original, mid-budget cinema is dead? I think not.