Everything about Mission: Impossible - Fallout (2018) screams bigger is better. Whether it's Tom Cruise dangling from a helicopter in the Himalayan mountains, or a car chase in central Parisian rush hour, each subsequent set-piece sets a new limit that's tested and then blown out of the water. But frankly that fact is nothing new, as this series has been going for over twenty years now and every time a new film graces - or rather affronts - our screens, the stunts are even more ambitious and the stakes are far higher than ever before.

In this sixth instalment there are definitely no exceptions made there, as a large chunk of the world's population are at risk when the remainders of anarchist group The Syndicate set out to create three simultaneous nuclear explosions around the globe. It quickly becomes a race for Cruise's Ethan Hunt and his team to diffuse the plan before the ticking clock stops, and unsurprisingly the turning of events just so happens to send them across the world to some of the most glamorous locations you could imagine.

But on top of all of that stuff this film is also aiming to broadcast a more personal adventure for Ethan Hunt, which is only appropriate as this series has never just been about the stunts and has always had a little smattering of something else to make each film stand out from the others. Usually, much of the reason for that comes from the fact that a different writer/director is brought in each time around, but here Mission: Impossible - Rogue Nation (2015)'s Christopher McQuarrie is returning after making a somewhat half-arsed attempt at delving deeper into the espionage side of things last time to make a more character-focused movie overall. 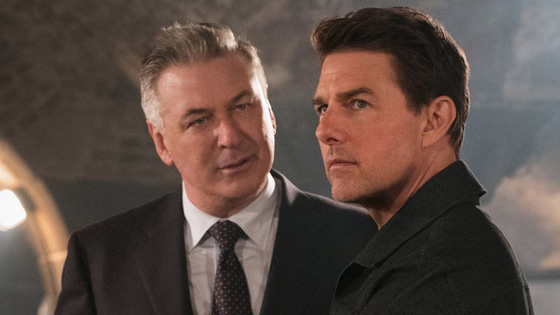 We certainly open in that vein - with Hunt dreaming of his estranged wife in danger - and then on mission when he's forced to choose between losing one of his teammates or successfully completing his task, we begin to understand what intense emotional strain his job constantly puts him under. Also, this is the first Mission: Impossible film where any of his friends have ever sat down and explained to anyone what really drives Ethan and why he does what he does, and throughout the course of the movie his mysterious character successfully begins to unravel as a man who will go to Superhero-esque lengths to protect every innocent man.

This means we really begin to empathise with him, which is a relief as in the previous movies he's largely been a fairly closed book to the audience - a man rather like Cruise himself who captivates and intrigues, but whom you never feel you truly have a grasp of. So, whilst we may not get any back-story here, we do begin to understand Hunt as a person, and because of that it's an especially tense experience seeing him being put through his paces physically.

Indeed, the investment you have in the action in Fallout makes it genuinely nail-biting and often excruciating to watch, and that's naturally made even more so the case by the tangibility of each set-piece, as every punch, every fall and every crazy stunt looks and feels genuine. Now of course, in large part that's because it is completely real, as Cruise constantly risks life and limb (in this case, one limb quite literally felt the brunt of his commitment when he broke an ankle jumping from building to building) to bring tangible action for the audience of the kind that we don't often see in today's CGI-blockbuster age.

Much of that gritty physical action comes from the addition of a moustache-laden Henry Cavill (mostly known for his role as the latest Superman) playing a shady CIA henchman brought in to watch over the mission and who's approach is described as a "hammer to Ethan's scalpel," but who - seen as Hunt is hardly the most graceful tool himself - is probably more accurately described as a wrecking-ball to Ethan's mallet. There's an extremely intense bare-knuckle fight involving the two of them in a bathroom where no punches are pulled and the film easily earns its PG-13 rating, and by the time the final act comes along and the impending doom is ticking ever closer, the two are truly at loggerheads with each other.

That final act in question is a ridiculous helicopter sequence that's rivalled in sheer intensity and extremity only by the central car chase in which stocks of motorbikes and old BMWs were surely eaten through by the bucket-load. But then you'd think Tom Cruise would have needed replacing by now, but at fifty-six years of age he appears to be more committed than ever to delivering the intensity and physical integrity that this series continues to offer both in terms of the spectacular action, and - perhaps in this one more than ever - the character moments as well.

Frankly then, this series just wouldn't be what it is without Cruise, and even if its plot is relatively predictable and over-complicated at times, this sixth instalment may well be the very best yet as it focuses on Ethan as a character to make the obligatory action and stakes all the more intense and exciting. Couple that with the usual injections of humour and lush cinematography and locations, and what you've got is a strong summer blockbuster that will have you on the edge of your seat from start to finish and constantly enjoying the ride. 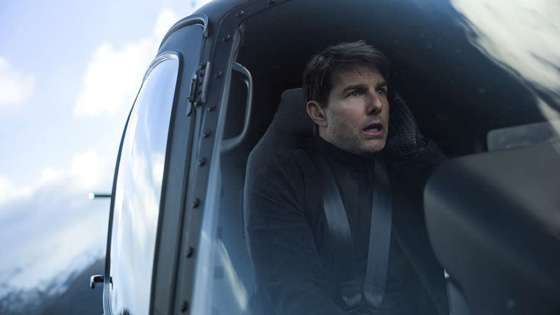 So, all in all Mission: Impossible may well be the one Hollywood franchise where bigger really does work for better, and that's because everything has a rare physicality and heft. McQuarrie's Fallout in particular ups the personal stakes to make for something more emotionally affecting overall, and in the end it's another excellent instalment that suggests Tom Cruise and this series have got a lot of life left in them yet.

The only question left to ask now is how on earth they could possibly go bigger for the next one. Mind you, we all wondered that last time too...