As this film's predecessor so brilliantly put it, "no-one’s impressed by a dinosaur anymore," and that's an issue that's only ever going to become increasingly prevalent with each subsequent installment of the long-running Jurassic movie saga. Filmmakers and Mesozoic theme-park owners alike can no longer rely on the shock and awe of seeing a dinosaur brought to life for the first time like they could back in 1993, so whilst at their best these projects offer a neat commentary on commercialism and the consequences of humans meddling with nature, at their worst they're overrun with effects-driven action and empty spectacle.

This fifth and latest installment Jurassic World: Fallen Kingdom (2018), then really needs to get creative with its use of the beasts, as its explosive story follows on from the desertion of Jurassic World to see central characters Owen (Chris Pratt) and Claire (Bryce Dallas Howard) return to the park and free the dinosaurs from a huge volcanic eruption, only to find that they're saving them for a company with a far more sinister agenda. It quickly becomes a battle against corporate evil with global stakes and dinosaurs stomping around the shop by the bucket load, but the job of reigning it all in falls into the hands of director Juan Antonio Bayona who has thankfully been known to bring personal stakes and charm to many a blockbuster genre - from the disaster movie in The Impossible, to fantasy in A Monster Calls.

It's a hopeful proposition especially after the brilliantly restrained and surprisingly smart Jurassic World (2015), but unfortunately this time around it has to be said that whilst some charm shines through, the film largely finds itself headed down a slippery slope where spectacle takes the centre stage and more becomes more. 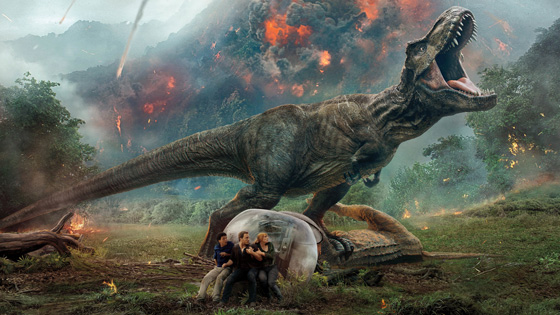 Indeed, this film appears to be less concerned with the franchise themes and more interested in the set-pieces as its story very quickly becomes a straight good guys vs bad guys mission. We pick up the relentlessly badass and rugged hero Owen building his own shack in the Canadian wilderness, and we find Claire having turned a complete one-eighty from her corporate life as park manager by running what can only be described as a dinosaur-rights activism campaign with two appropriately Bohemian teenagers.

But that's about as political as this thing gets, as after they help rescue the dinosaurs from the deserted island for a businessman who screams evil schemer the moment you lay eyes on his festering grin and clean-cut suit, they follow the beasts getting transported to the basement of a creepy old mansion with impending doom written across their dino-foreheads to begin a plucky battle against bad.

The idea, you suspect, was that the film would then pack a kind of 'creature in the basement' vibe - a sense magnified by the inclusion of a petrified young girl living in the house who stumbles into Owen and Claire as they're sneaking around. The thing is though, dinosaurs are never the villain of this story, and even if there's an attempt to create one unequivocally evil beast, you're never truly frightened by any of the creatures downstairs because the film is just so relentless with the set-pieces that involve them, and so detached from the morality of it all too. 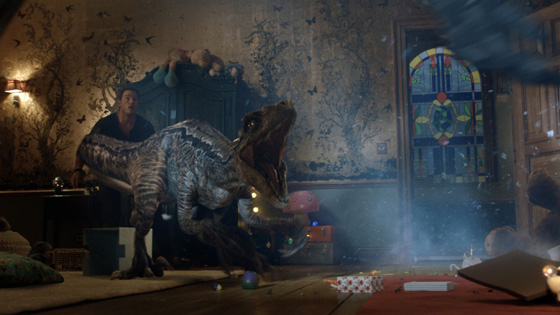 Seriously, this thing isn't far from a simple agglomeration of spectacle from start to finish, and even if on their own the action moments are genuinely very well-executed and more iconic than those in Jurassic World (2015), they often lack real heft because there's little restraint or moderation. Equally, it's never really clear what the characters we're rooting for are planning to do if they do win, so the whole mission is rather hard to get behind as the good characters are constantly reactionary.

The main saving grace here then is the performances, as Chris Pratt and Bryce Dallas Howard continue to develop engaging characters and a sparky relationship, and as a result they practically carry the film - arguably along with their spectacularly animated Jurassic friend Blue - and make the whole thing watchable and some of the action moments entertaining. 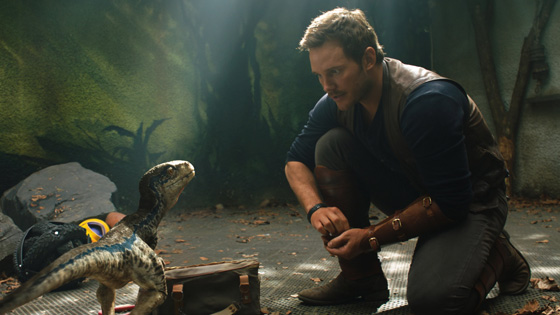 All in all though, this is a fairy lacklustre sequel that represents the pitfalls of the franchise rather than its interesting elements. If you're someone who's still impressed by seeing a dinosaur on screen chasing a group of plucky heroes to their certain survival, you'll enjoy Jurassic World: Fallen Kingdom (2018), but those people are in short supply by now, and it's becoming clearer than ever that the answer to cracking the Jurassic series isn't spectacle but thematic significance and heart.

So, despite some great moments and engaging performances, Juan Antonio Bayona has failed to work his magic here, and frankly it's a shame that this weak story lead to a film where more is seen as more but where less should really be the aim. A fallen kingdom is certainly where this universe is beginning to head, and it's going to take some doing to make a properly personal and interesting sequel to round out the Jurassic World trilogy that started so well in 2015.