"Never, never, never give up," is not only one of many quotable nuggets to spew from the mouth of the most famous leader in history, but it is also seemingly the phrase on the lips of producers everywhere when faced with the prospect of another Winston Churchill portrayal.

Indeed, there have apparently been upwards of seventy film and television renditions of this infamous man over the years, and in the last fourteen months alone there have already been three (actually four if you count Anthony Hopkins in Transformers, but you really shouldn't) so with Gary Oldman now picking up the cigar in Joe Wright's 'Darkest Hour (2017),' the question is very much what new approach he and the film can bring to the table.

After all, whilst it's been done many times, a Churchill-centric movie is by no means an easy thing to get right, as it can quite simply turn into a re-hash, a check-box history lesson, or a film that relies too much on patriotism and nostalgia, and that's not to mention how difficult it is for an actor to embody such an iconic figure. What 'Darkest Hour,' aims to do though is not to treat Churchill as a figure at all, but to follow him in his first weeks as prime minister and depict a person like the rest of us who's thrust into a desperate position as a vulnerable little fish in a very deep, dark pond. 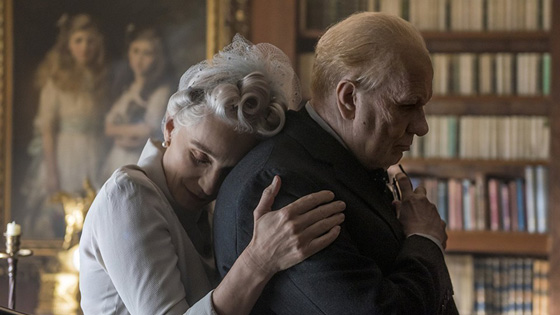 The first shot we see of this Winston - unlike in last year's creatively titled 'Churchill,' where he's introduced as a leaning silhouette in an overcoat with cane in hand - is of him eating (and of course, drinking) breakfast in bed sporting a beige silk dressing gown in place of the suit that you may have expected. This is not only an amusing subversion of expectations, but it also sets out exactly what this portrayal is all about; not the clichéd and polished one you know, but more so a delicate exploration of what he was really like.

It's safe to say that few are better suited to do that than Gary Oldman, who delivers a beautifully nuanced and awards-worthy performance that makes for many surprisingly amusing and charming moments, and of course crucially keeps you thoroughly invested in the story from start to finish no matter how slow the pacing is. He really feels like a real person you're watching on screen, and this physicality is aided tenfold by the prosthetics where artist Kazuhiro Tsuji has done an incredible job turning Gary Oldman into old-man Gary to an extent that you barely recognise who's underneath. 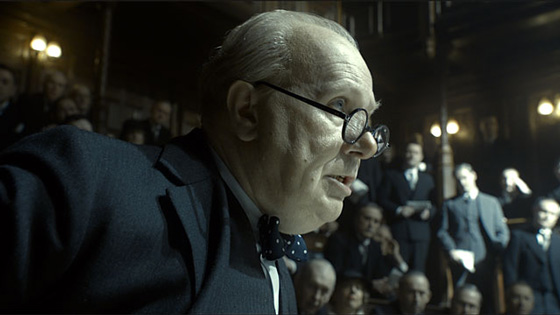 Of course we've seen great versions of this character before, but this one in particular is all about the humanity, and in fact the central themes of 'Darkest Hour,' are less concerned with the film's pre-Dunkirk political happenings, and more so with hope and human triumph under pressure.

This is not only reflected in Winston's own personal arc here, but is also embodied by a scene where we see him talk to members of the public - something he did reportedly do on many occasions - which is properly emotional as it is pivotal to Winston's story and completely sums up the messages of the whole film which are - despite the obvious period setting - completely timeless. 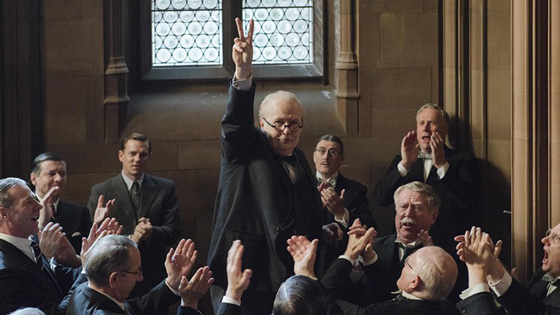 All in all then, 'Darkest Hour (2017),' takes a very human approach to its central character and translates the hope and triumph of this individual story into a timeless message that makes it one of the most affecting and emotionally engaging films that we're likely to get this year, and one of the definitive Winston Churchill stories.

In fact, I would argue that it makes a perfect double-bill with Christopher Nolan's recent 'Dunkirk,' not just because their dates overlap, but because both share a story of people - powerful or not - coming together and staying hopeful against all the odds, even in their darkest of hours.