'War for the Planet of the Apes' Review

Summer blockbusters often try to get away with slapping just enough style and cheap jokes into their money-grabbing run-times in an attempt distract their audiences from lack of real substance, but the two films we've seen from the planet of the apes reboot series thus far have both proved that movie-goers are wildly underestimated, and that blockbusters built on touching emotion and thematic exploration are the real keys to people's pockets.

That's why this third installment - 'War for the Planet of the Apes (2017)' - is so widely anticipated, and if anything, it's set to up the serious gravitas even more as it sends humans and apes into a sprawling physical and philosophical battle for survival. Here, after he and his apes suffer heavy losses, Caesar (Andy Serkis) wrestles with his own instincts to begin on a personal quest that leads him face-to-face with a ruthless human colonel (Woody Harrelson) amidst a huge and messy war.

However, despite its sprawling ambitions and beautiful spectacle, once again what makes this film so impactive is its soul. Indeed, whether we find ourselves in battle or not, everything is done so delicately and tentatively here, and as a result the film is able to deliver engagement and gravitas to match - if not exceed - the efforts of its brilliantly touching predecessors. 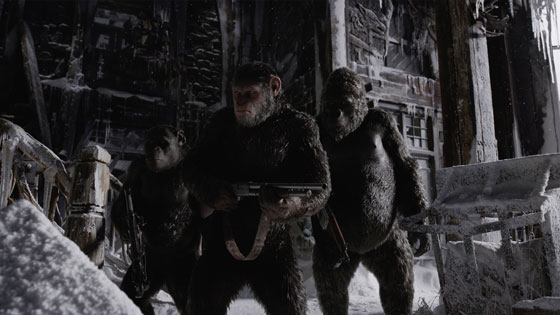 Take for example what is probably the best scene in the movie, where the chimp Maurice meets an orphan mute child (Amiah Miller) and forms an immediate bond. Now usually in cinema of this scale that kind of sequence might be brushed over rather quickly, as might scenes of the leads trekking across vast expanses of landscape, but here director Matt Reeves gives everything time to breathe and manifest itself in every corner of the heart.

But it's not just time that this perfectly-paced movie has on its side, for the way silence is used to express feeling and emotion speaks even more of the brilliance on display, and in fact in the above-mentioned scene there are no words spoken; merely a few shots of faces that expose not only the simple effectiveness of an expression at telling a thousand words, but also the further advances in visual effects that allow that kind of real intimate life to breathe from a primate's face.

On that note, it's only the standard of filmmaking on display that allows the movie to take its time in the way it does as the intense focus drawn to the performances, effects, lighting and sound design that this brings mean those elements are very much placed under the spotlight. 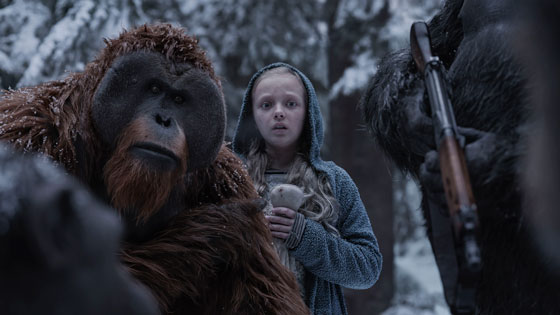 Andy Serkis in particular does unsurprisingly excellent work with his motion capture yet again, whilst Woody Harrelson nails his role as the unhinged but nevertheless rather grounded villain who radiates menace as much as he illustrates the tragedy of the entire scenario.

But perhaps who deserves the biggest credit is Reeves himself, as the increased delicacy he brings is genuinely brave, and the success of this means that the incredible spectacle is given weight and almost biblical emotional significance.

After all, his battle sequences are genuinely astounding - dripping with references to war-epics of the past - and the sheer visual splendour of them and the sweeping landscape shots bring another level to the film's already impressive emotional scope. Thematically too there's much to admire as the social climate of both apes and humans is very much the backdrop of the entire script, and this amassed with the impressively exposed filmmaking makes for a blockbuster that has as much gravitas as it has room to engage. 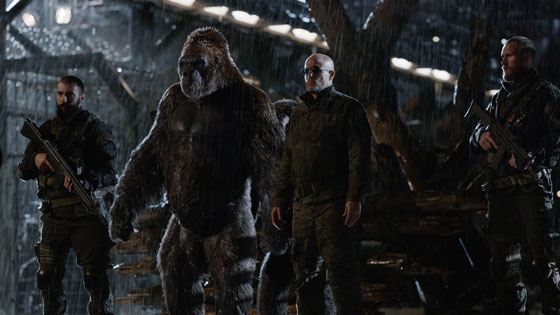 All in all then, 'War for the Planet of the Apes' is rather neatly embodied by its final frames of beauty that are in themselves comparable to a large and all-consuming classical painting. Matt Reeves' beautifully delicate brush strokes build to paint a picture of incredible and complex beauty with enough big tragedy and emotion to absorb even the most cynical viewer. This is a very profound film, and the way it rounds out such a great trilogy in such a brave and delicate manor deserves an awful lot of credit, and definitely deserves a watch in the theatre.