This being my first throwback review, I wanted to revisit a film that meant a lot to me. And, in the case of this film, that I’ve put meaning into. Some people have gone so far to say that this film is a love-letter to film. First of all, while a nice sentiment, the phrase “love-letter” when describing a movie is often overused and has lost some of its meaning. Second of all, I do not agree with those people; rather than a love-letter to film, I believe it is more a love-letter to people who love film. And that’s where people like us can all connect to this film; whether you’re from a secluded Italian village or a big American city, we can all find a bit of ourselves in this film.

‘Cinema Paradiso (1988)’ is an 80’s film that feels like a 70’s film, and I mean that in the best way possible. With the 80’s came a wave of films that seemed to focus most on fun, entertainment, and the overall experience of enjoying a film (Ferris Bueller’s Day Off, Back to the Future, Ghostbusters, Top Gun, Die Hard, A Nightmare on Elm Street). However, what the 70’s brought to the film world was more character-based films that focused on the development of the characters rather than put as much time and effort into spectacle (Jaws, Apocalypse Now, Alien, The Godfather, Rocky). This film is simply a quiet, beautiful look at a quaint, ordinary Italian town that is swept off its feet by the local moviehouse. Specifically, the love of film takes over the heart of our protagonist, a little boy named Toto. We first see the effect of this love affect him as a child; he uses every chance he gets to sneak off to the Cinema Paradiso, whether he has to use his mother’s money or just sneak into the projection booth. And this leads us to where the story begins: with the projectionist, Alfredo. 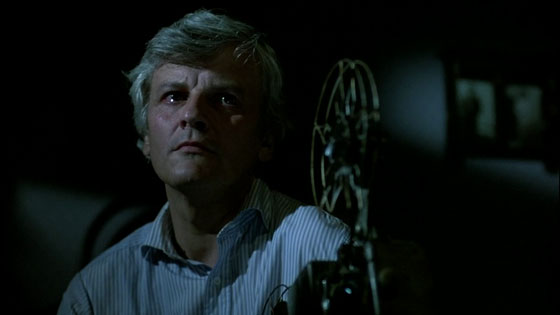 The film is genius in its portrayal of ordinary life. To be honest, not much happens in this film; there is no grandioseness anywhere to be found. Now in some movies this would be a problem, but here, we see the journey of a boy and how his love of film affects his whole life as he grows up in this quiet town. And there is something so very refreshing about watching what feels like real life. So much so that when certain tragic events happen, it feels that much more moving when it affects all of them. In terms of performances, everyone is great. It’s hard to pinpoint certain performances, because all the characters just blend in as part of this nostalgic time (and I mean that in the best way). However, the two standouts for me are Philippe Noiret as Alfredo, Toto’s sudo-father figure, and Jacques Perrin, Toto as an older man. They both manage to achieve a level of emotion that I can basically only find in real people, and that is the best compliment I can possible give an actor.

Now I’d like to talk about the musical score. We all know of John Williams, probably the best composer of all time (Star Wars, Harry Potter, Indiana Jones, Jaws, E.T, Superman). Nevertheless, I would say Ennio Morricone is up in the upper-echelon of film composers. He’s most known for his scores for films such as ‘The Good, the Bad and the Ugly (1966)’ and ‘The Untouchables (1987)’, but perhaps his most moving score is this film. I am no expert in the field of music composition, but the way the the main theme starts with a nostalgic melody on piano, and then builds more and more with the violins, the cellos and the rest of the instrumentation, it could bring you to tears just listening to it because it is so representative of the emotion of the film. 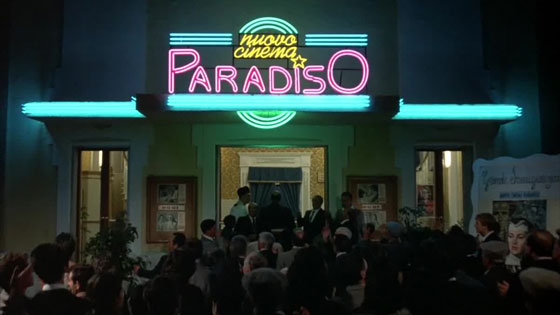 In short, this is one of my favorite films, and as I have analyzed the film in depth over time, and I cannot find any real flaws with this film. The performances feel so genuine, the music is the definition of poignant, and the overall it just feels like such a lived-in and real environment. This is a film that really explains the love of film. Every film-lover can find a part of themselves in Toto, and that’s a remarkable feeling. This film has affected me so much, whether it be the enhancement of my appreciation of this art of moving pictures, or my impractical but hopeful sense of romance. I am going to give the film a “10 out of 10”.

Thank you for reading! What do you think of 'Cinema Paradiso'? Have you seen it, or do you want to see it? Leave your comments below!