There is a fleeting moment in 'Baby Driver (2017)' where the excitement of its constant brilliance and crazy action winds down a notch or two as the lead character begins to dream in hazy black-and-white slow-motion, and in a way that little while completely personifies the feeling you get once you've got up from your seat at the end of this gem of a film. Yes, after the credits roll, suddenly, much like when you step off a travelator at an airport with all your heavy luggage in tow, it becomes terribly apparent how stationary the floor is, and how much effort it is to walk in comparison to the electric activity that you just experienced.

I suppose one could say that it comes as no surprise that 'Baby Driver' is such a whirlwind given that 'Shaun of the Dead' and 'Scott Pilgrim vs the World's' Edgar Wright is at the helm, but the fact it's such different territory for the writer/director is very interesting indeed. After all this isn't about a zombie apocalypse or a teenage boy battling seven evil video-game super-villains; this is the simple story of Baby (Ansel Elgort) - a talented getaway driver who relies on the beats of his personal playlist to drive away from cops and drown out the noise of his tinnitus. After meeting the girl of his dreams though, he sees a chance to ditch his shady lifestyle and make a break for normality, where he begins on a very difficult journey against his old world.

Sounds fairly simple, right? Well the premise certainly is, but the way each and every frame is directed and edited together will have you truly captivated, and the result is a film that strays extremely far from convention and really does make reality feel a little slow and boring in comparison.

That fast-paced excitement begins right from the get-go, as the film shoots off its starting blocks with Baby chucking a bright red Subaru around like you've never seen, all to the music literally in his ears - this time 'The Jon Spencer Blues Explosion.'

As we advance to the next track and then the next, it becomes increasingly clear that music doesn't just accompany 'Baby Driver', but that in fact the entire film is a giant piece of brilliant choreography - think less 'Guardians of the Galaxy,' more 'La La Land,' on wheels without the singing. Yes, not only does the action almost comedically move in absolute harmony with the heartbeat each song brings; even the scenes in between use music to add real energy and captivating urgency - enrolling steps, gun shots, police sirens, buskers and all manner of general everyday noises into the fold of whichever track is playing.

It's this, along with the sheer brilliance of the action on display that makes it such a whirlwind of greatness, but what's even more striking is how effortless all of that feels. Indeed, Edgar Wright's hand is so experienced now that even something as complex to put together as this feels more like he's cruising a highway at sixty than navigating the edge-of-your-seat stuff that he really is. In that sense 'Baby Driver' is almost a thing of beauty to behold in itself, and whilst I could liken its overall​ effortlessness to a breeze, I feel the snappy tempo and excitement means that the word tornado is probably more appropriate. 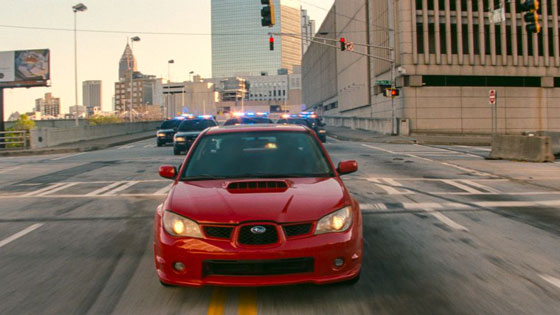 However, there are plenty of films that are exciting and well put together (even if there are very few quite as good as this) so what's important is that there should be other ingredients as well to keep you there once you're whipped up by the wind. Luckily in the case of 'Baby Driver', there definitely are, as despite the fact it enjoys its snappy rides and whizzy energy, the film still finds plenty of time within all of that to develop a set of characters that you can engage with.

Baby's story is actually rather touching in places, and his relationship with Debora (Lily James) is not only the sparking point for the entirety of the plot, but it also grounds the experience you have in something very human that you actually care about. 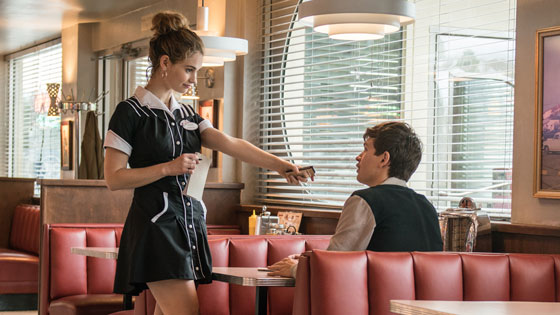 Perhaps unsurprisingly by now too, Wright's script yet again finds genius ways to seamlessly combine badassery, whit and genuine character development all in one truly admirable package - "You rob to support a drugs habit, I rob to support a robbery habit," is a prime example - and even if it often has a slightly 'Pulp Fiction' Tarantino edge to things, the way Wright instructs his cast to deliver their lines makes it all feel far more natural than it could otherwise have been.

Ansel Elgort in particular deserves a lot of credit for giving Baby a distinct and appealing vulnerability amongst his criminal colleagues, as well as a clear sense of puppy-like enjoyment behind the wheel (or indeed in the presence of Lily James' doe-eyed smile). Perhaps though, the real star of the show is Kevin Spacey, as his performance as the mob leader is by far the most amusing thing here - staring dead-pan into the distance as though he's gazing at Wright mix the next "hip track" back stage. 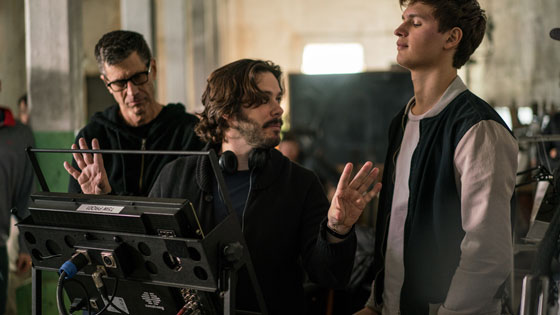 All in all though, the real winner here is indeed Wright himself, as the sheer heart-pumping adrenaline that bleeds from his innovation is truly addictive. The worst part of this film? It's when it ends, because the slow, quiet, and unmoving humdrum of reality is suddenly very apparent indeed, and before you know it you'll be heading back to the cinema for another hit of fast-paced greatness.

At this point I feel I need to issue a last-minute warning: whatever you do, don't drive home from seeing 'Baby Driver', as once you've acquainted yourself with the still floor and clambered into your car, you may find that you feel hugely restricted by the confounds of your inability to drive like an absolute maniac and the mere 30mph that you're allowed to travel. Sadly, once you've spent the last hour and fifty-three minutes wrapped up in a roller-coaster of Edgar Wright's sheer brilliance, it can be pretty daunting to return to reality, and that is, in every possible sense, a compliment.