Alone in Berlin (2017) is the story of Otto and Anna, a husband and wife team who, while living in Berlin, lose their son, a German soldier, in World War II. As a result of their child's death, Otto decides to start a postcard campaign attacking Hitler and the Nazi party. I was lucky enough to see Vincent Pérez, the director of the film, speak during a Q&A session at the Atlanta Jewish Film Festival (AJFF) where I saw the movie.

Alone in Berlin is a very simple and somewhat slow film, but the main narrative which revolved around the postcard campaign and investigation was very intriguing to me. Brendan Gleeson (Otto) and Emma Thompson (Anna) are excellent in their roles as the depressed couple at the center of the story. Throughout the film, though, I found myself wanting to understand them more. I wish the story would have spent a bit more time exploring their relationship and their internal struggles instead of focusing on the extraneous characters that provided very little to the progression of the film. During the post-film Q&A the director, Vincent Pérez, mentioned that one of his biggest struggles while making this movie was how difficult it was to rebuild Otto and Anna's relationship with so few words. And unfortunately, this shows in the final product. 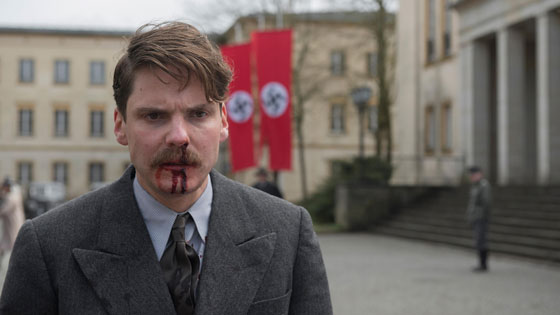 My favorite part of this film was by far the investigation, which was led by Inspector Escherich, who is played by the always excellent Daniel Brühl. Escherich's struggle with his emotions and the extreme pressure from the Gestapo make for some of the more intense and extraordinary moments in the film.

Overall, Alone in Berlin is a decent movie. It does struggles with slow pacing, but thanks to the intense moments that revolve around the investigation, the film stayed just above the "too slow" line. Gleeson and Thompson are excellent as the depressed couple, but for me, the highlight performance was Brühl's Inspector Escherich. I give Alone in Berlin a 7 out of 10.