There is a word I have for films like 'A United Kingdom (2017)', and in no way is it a derogatory term; I simply use the term to describe a well-done, perhaps profound but lethargic movie that you would recommend to your great aunt. The term: a Tuesday afternoon film. That is what I felt watching this movie. The director, Amma Asante, also directed the acclaimed period piece, 2013’s 'Belle (2014)', another Tuesday afternoon film in my opinion. Asante now takes on this project, the story of two people who love each other; it just so happens that this woman married the king of Bechuanaland. What they did not take into consideration is that it is forbidden that he bring a white queen back from London.

Intrigued yet? The trailer really pulled me in when it came out, especially because the two leads have recently come off of incredibly celebrated, yet underrated performances. Rosamund Pike starred in David Fincher’s newest hit 'Gone Girl (2014)' not too long ago. Meanwhile, David Oyelowo garnered a great deal of Oscar buzz (sadly and unfairly to no avail) with his starring turn as the iconic Martin Luther King Jr. in Ava Duvernay’s 'Selma (2014)'. And with a cast like that, and a story so compelling, what’s not to get excited about? However, the film, while well-produced and extremely well-acted, feels like a very glossy and somewhat bland attempt at an Oscar-bait project. 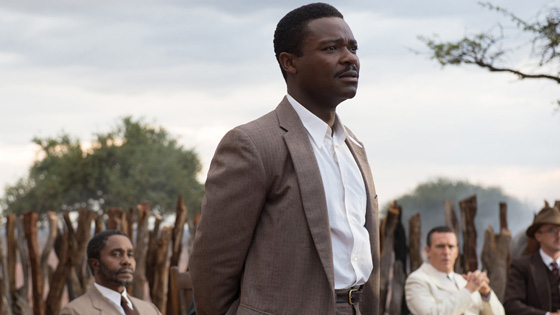 Let’s start with the positives of the film. The two stand-out performances for me were David Oyelowo as Sir Seretse Khama and Terry Pheto as his younger sister Naledi. David Oyelowo is, in this writer’s somewhat humble opinion, one of the most under-appreciated actors working today. The man purely has a way with words, what he did best in Selma he masters again in this film: the art of the cinematic speech. Oyelowo knows how to take a cut-and-dry monologue and make it his own, making every word feel important as it comes out of his mouth. He is an actor that does not brag in his performances; he is subtle and understated, and yet has the attention of everyone around him. Terry Pheto, a relatively unknown actress, manages to go toe-to-toe with Oyelowo, Pike, and every other actor she encounters. Her presence is as palpable as her performance itself . She commands the screen with intensity and grit, and I would love to see her get more work.

Now in the case of Rosamund, a fine actress, I believe that she was not given much to do in this film. With what she was given she excelled, but I feel that her character was not made out to be very strong or compelling; she is purely by her husband’s side in the film as a love interest. Which brings me to the biggest detractor of the film. While the film’s costume and production design were beautiful, there was a layer missing that left me feeling not so invested in the story all together. It was unfortunately the same issue I had with last year’s 'Hidden Figures (2016)' in that it was glossy and only touched the surface of the themes it was trying to explore, which in turn conveyed to the viewer (or at least myself) an unwelcome feeling of pretense. The most compelling component of the film for me was the political intrigue behind the couple’s struggle; Khama’s fight for his right to the throne and the inner workings of that conflict. However, the film spends just as much time on the strain put on the couple’s relationship, which does not come through nearly as interestingly as the filmmaker had intended. This may be due to the lack of development and character given by Pike’s sometimes trying but altogether accommodating performance. All being said, I’m going to give this film a rating of "6 out of 10". Are you guys interested in seeing this film? Let us know in the comments below!