"A Dog's Purpose (2017)" is based on the beloved bestselling novel by W. Bruce Cameron and tells the story of Bailey, a devoted dog who's journey spans across many lifetimes as he tries to figure out what his purpose is in life. The film is directed by Lasse Hallström and stars Josh Gad, Dennis Quaid, and Britt Robertson and is available on Blu-Ray, DVD, and Digital HD now.

Going into the film, I was expecting a cry-fest of dog's continually dying and being born into different lives (happy and not happy lives). Well, my expectations were only partially right. The film does tell the story of a dog who has to go through multiple lives, but the dog's deaths and the not-so-happy lives are portrayed very tastefully and with respect. I was worried I would be beaten down emotionally while watching this film, but that wasn't the case. It of course has sad moments, but they weren't as heart-wrenching as I thought they might be. The filmmakers clearly wanted the film to be a happy, feel-good movie that the whole family can enjoy. 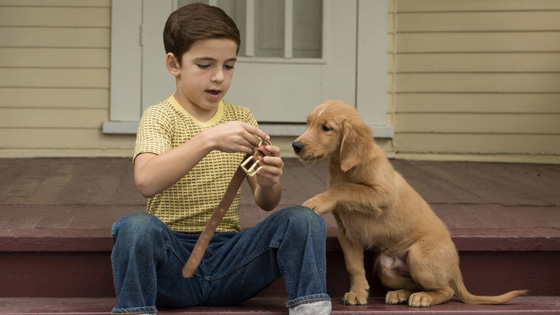 The cast of the film was excellent all around, especially the 4-legged furry ones. You can easily tell that all of the actors and actresses involved in the film, are dog people in real life as their chemistry with their 4-legged counterparts felt very authentic. The standout of the film is unquestionably Josh Gad. His voice was perfect for the main dog and I chalk up a big part of the film's ability to stay happy and positive to Josh Gad's excellent voice over work.

I only had two issues with the movie. First, I felt that the story was a little flat and I wanted to see a bit more story arch. While the film does progress through a couple of different life spans of the dog, it focuses mostly on the story which involves Ethan (K.J. Apa and Dennis Quaid) and Hannah (played by Britt Robertson). All of the other lives of the dog felt a bit rushed and didn't have much story. I wish they would have spent about another 15 minutes with those other lives of the dog to further develop the characters and the dog's effect on their lives. My second issue with the movie is that the ending was a little stale. The film builds up to a big grand moment, and when it happens, it just felt a little anticlimactic. 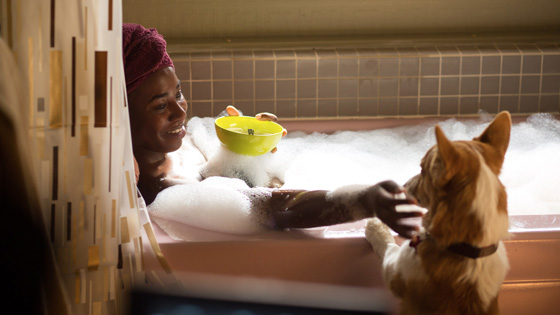 When "A Dog's Purpose" was released back in January its theatrical release was overshadowed by a TMZ video which showed some questionable treatment of one of the dog's on set. As many have questioned, I am curious as to why the individual held the video for so long. If there was valid animal mistreatment, they should have reported it immediately. The person that recorded this video was apparently just trying to make a buck and sabotage the film. According to The Hollywood Reporter, "An independent animal cruelty expert had concluded that safety measures on the set of the film were in place and the video had been deliberately edited to mislead the public." (Source: The Hollywood Reporter)

Overall, "A Dog's Purpose" is an enjoyable film. It features some sad moments but is was not as heart-wrenching as I though it might be. I am sad that the movie was overshadowed by the alleged animal treatment issue because I think most animal lovers would enjoy the film and it would make them love and appreciate their animals even more. I give "A Dog's Purpose" a 6 out of 10. 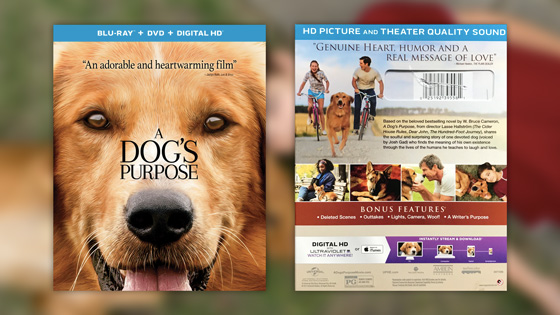 "A Dog's Purpose" is now available as a Blu-Ray, DVD, and Digital HD combo pack. I watched the Blu-Ray version of the film and was very pleased with the picture and audio quality that disc provided. The Digital HD version that comes in the combo pack can is retrieved either via UltraViolet or iTunes.

The combo pack also features a high-quality slipcover with some embossing of the film's title over a super cute photo of a dog on the front. The back of the slip features a few more adorable pictures of the various dogs and their owners from the film as well as a summary of the film and the available bonus features.

The bonus features which are available on both the Blu-Ray and DVD discs consist of some deleted scenes, trailers, outtakes, and a couple of features about the film and the book. Animals can be quite unpredictable, so as you can probably guess, the outtakes are cute and funny. The feature "Lights, Camera, Woof!" was one I enjoyed. It is a making-of documentary, that is shot from the perspective of "Roxy," another dog featured in the film. It was interesting to see how they trained the dog's and accomplished some of the unique camera angles and scenes that were featured in the film. The final feature on the disc is "A Writer's Purpose, " and it tells the story behind W. Bruce Cameron's bestselling book.