By Barnaby Turner | Leave a Comment | Published 6 years ago

Until a week ago, if you wanted an example of tangible sci-fi world-building, you didn't have to look any further than the original Star Wars trilogy. Now though, Rogue One: A Star Wars Story (2016), - the first of a potentially endless number of stand-alone Star Wars 'spin-offs' from Disney's Lucasfilm - has graced our screens, and not only is it the excellent adventure I expected after the brilliance of Star Wars: The Force Awakens (2015), it also gives us our first REAL feeling of what it's like on the ground in this galaxy far, far away.

The film is set just before Episode IV and follows Jyn (daughter of farmer-come-Empire scientist Galen Erso) who is captured from an Imperial labour camp by rebel spies. She's then sent with a rag-tag team to gather information about her father's latest Imperial creation, which sends these rebels on a seemingly impossible mission against the Empire.

Now I was as excited as any Star Wars fan for this film, as the high-stakes and impossibility of the task at hand were massively appealing to me. What I didn't expect though was the gritty realism of the world, and the genuine nature of the characters it finds itself dealing with. Yes the extent of that tangibility was a brilliant surprise, and it's definitely what struck me most about Rogue One.

Now of course, it's natural that the story explores more relatable corners of Star Wars, as the characters aren't your Skywalkers or Kenobis; they're ordinary, powerless people being crushed by the Empire like everyone talks about (but truly never sees) in Episodes IV, V and VI. It certainly should be easier to make this story feel as grounded and engaging as it does, but it's what they do with these characters and scenarios that really makes you feel it.

For that, huge credit should be given to Gareth Edwards' (or Tony Gilroy's) overall direction, as well as the incredible set design that brings everything to life with such a real sense of scale and authenticity. Honestly, I won’t stop banging on about how real and intimate this whole experience is, because it's by far the best thing about the movie. In some ways Rogue One makes other Star Wars films look comparatively detached and theatrically wondrous, as situations like Jedha feel so real, whilst characters like Jyn or Galen also seem so much like genuine people. 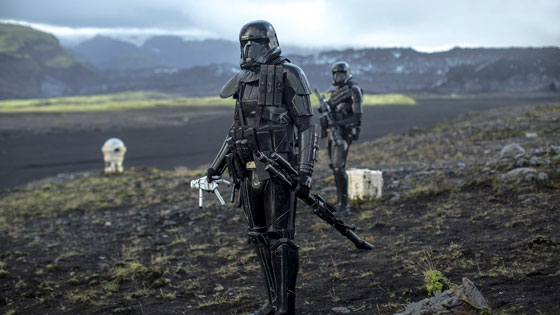 Now I know if I were reading this review having not seen the movie I may be worried at this point, because part of what makes Star Wars so enjoyable to me is that theatrical wonder. And yes, this is a very different, grittier kind of Star Wars film. But ladies and gentlemen do not fret; it's also very much a balancing act, and it still manages to keep one foot firmly placed in classic Star Wars territory.

Firstly, the magic is retained by a steady tonal balance between the new-found darkness and realism, as well as some gorgeous Spielberg magic that somehow finds its way in there - perhaps mostly from Michael Giacchino's swooping and mischievous new score, or from Chris Weitz or John Knoll's poetic (and sometimes humorous) character writing style.

Second, it can't be denied that Rogue One plays the nostalgia card a few times, with plenty of call-backs and stylistic choices that make it feel like Star Wars (which is evidently a good thing seen as we're seeing such an intimate portrayal of that world - arguably for the first time). Many will be pleased it strays far more into new ground than last year's Force Awakens though, and I do agree that the balance is pretty bang on there.

To further press the nostalgia note, one other big point of discussion around Rogue One is the computer re-creation of 2 particular characters from the original trilogy, which I won’t name in fear of the fact you've somehow avoided the topic so far, or haven't seen the film yet. All I have to say in that regard is that the CGI is sublime on one of the two, and that one particular performance is not only vital, but also excellent. As for Darth Vader? Well he's badass of course, and he steals every scene he's in (even from Ben Mendelsohn’s brilliantly steely bureaucrat Orson Krennic) but don't go to the film just for him as his appearance is definitely more of a cameo than a full-on role.

Really you can forget about all that though, as Rogue One features plenty of great new characters, and is most certainly an impressive display of how good writing, acting and direction can bring a whole group to life in one movie. Sadly, much like their legacy in the following saga, I may not remember the rebel team-members as much as the likes of Han, Leia or Luke, but most importantly I know I understood them and felt the struggle through them when I was watching the film itself.

To get specific though, my favourite of the new bunch is definitely Chirrut Imwe (Donnie Yen) as the portrayal of his relationship with the force, as well as the way he does action, will always stick in my mind. Jyn Erso (Felicity Jones) is also a great lead with her appropriately rebellious vibe, whilst Alan Tudyk’s K2-SO shines as the comic relief character.

Crucially though, what makes you feel this team's struggle most is the way they're so cleverly interwoven within the story, and these high personal stakes mean watching them struggle is both as tragic as it is rewarding. 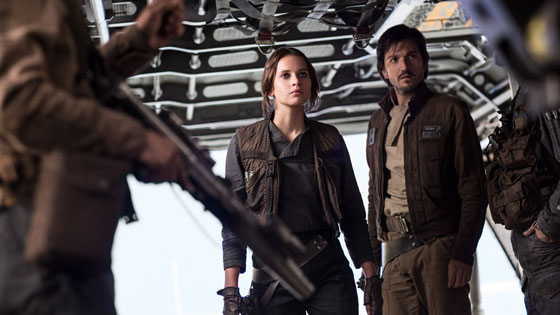 In the end, 'Rogue One: A Star Wars Story' is a story of hope. It adds a lot to the other films as it shows us what the world is like for ordinary Star Wars citizens, but the reason it works on its own is because of how genuine all of that feels. In fact, I'm pretty convinced the galaxy is real now, and that Rogue One is simply a very exciting documentary. I'll be ever hopeful of that, and ever more so after watching this, for hope is not only restored within the rebellion, but also affirmed in the saga. Roll on Episode VIII, I have absolute faith in this team now.