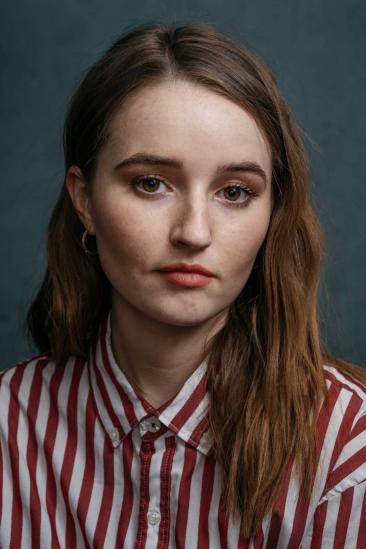 Kaitlyn Dever is an American actress. She is best known for her roles as Gwen Thompson in the American Girl film entitled An American Girl: Chrissa Stands Strong, Loretta McCready in Justified, Eve Baxter in Last Man Standing, and Jayden in Short Term 12.

Dever was born in Phoenix, Arizona, to Kathy and Tim Dever. At the age of five, she began her interest in the performing arts with her parents sending her to an acting school. She also participated in gymnastics, ballet and skating, until she focused on acting. Her family then moved to Dallas, Texas, where she enrolled at the Dallas Young Actors Studio in a month-long acting program. Honing her acting skills at the studio, she booked a number of commercials, before moving to Los Angeles.  Dever's first notable acting role was in the American Girl film An American Girl: Chrissa Stands Strong (2009) as Gwen Thompson, a bullied homeless girl. In 2011, she was cast in a recurring role as Loretta McCready in the FX series Justified during the show's second season. That same year she was cast as a series regular in the ABC sitcom Last Man Standing starring Tim Allen.

Dever's other television credits include Make It or Break It, Modern Family, Private Practice, Party Down, The Mentalist, and Curb Your Enthusiasm.

In 2012, Dever was nominated three times at the 33rd Young Artist Awards: for her supporting roles in Bad Teacher and Last Man Standing and for her recurring role in Justified. In 2013, Dever appeared in supporting roles in the critically acclaimed films The Spectacular Now and Short Term 12. Her role in the latter garnered widespread acclaim from critics.

Dever joined the cast of the 2014 film, Laggies, playing the character Misty. The film also stars Chloë Grace Moretz and Keira Knightley.  In 2013, She was cast in the upcoming comedy film Men, Women & Children directed by Jason Reitman.