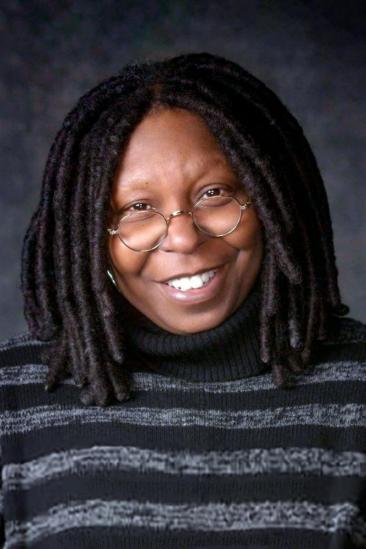 An American comedian, actress, singer-songwriter, political activist, and talk show host. Goldberg made her film debut in The Color Purple (1985) playing Celie, a mistreated black woman in the Deep South. She received a nomination for the Academy Award for Best Actress and won her first Golden Globe Award for her role in the film. In 1990, she starred as Oda Mae Brown, a psychic helping a slain man (Patrick Swayze) find his killer in the blockbuster film Ghost. This performance won her a second Golden Globe and an Academy Award for Best Supporting Actress. Notable later films include Sister Act and Sister Act 2, The Lion King, Made in America, How Stella Got Her Groove Back, Girl, Interrupted and Rat Race. She is also acclaimed for her roles as the bartender Guinan in Star Trek: The Next Generation and as Terry Dolittle in Jumpin' Jack Flash. Her latest role is the voice of Stretch in Toy Story 3. Goldberg has been nominated for 13 Emmy Awards for her work in television. She was co-producer of the popular game show Hollywood Squares from 1998 to 2004. She has been the moderator of the daytime talk show The View since 2007. Goldberg has a Grammy, two Emmys, two Golden Globes, a Tony, and an Oscar. In addition, Goldberg has a British Academy Film Award, four People's Choice Awards and has been honored with a star on the Hollywood Walk of Fame and is one of the few entertainers who have won an Oscar, Emmy, Grammy, and Tony Award.