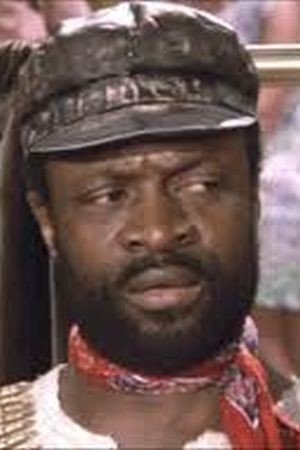 Eddie Tagoe is a Ghanaian actor best known in the U.K. for playing "Presuming Ed" in the 1986 film production of Withnail and I, a role which he resumed in 2000 in a stage production of the same work. Internationally, he may be better recognized for his brief appearance in the movie, Raiders of the Lost Ark. Billed only as the "Messenger Pirate", his character was sent to find Indiana Jones in advance of Nazis boarding the ship on which Jones was travelling. Initially unable to find Jones, he was instructed by the captain to look again, and immediately replied, "I found him!", pointing to Jones swimming to the Nazi submarine. Tagoe had a significantly larger part as "Chocolate Mousse" in the 1984 farce, Top Secret!, and appeared in various other roles such as Sgt. Gwambe in Baby: Secret of the Lost Legend, as well as in The Dogs of War and Pink Floyd The Wall. The son of a Ghanaian chief, Tagoe travelled to London to study reflexology prior to pursuing acting. In 1995, however, he returned to his reflexology career when he was recruited to serve as team reflexologist for Newcastle United F.C.