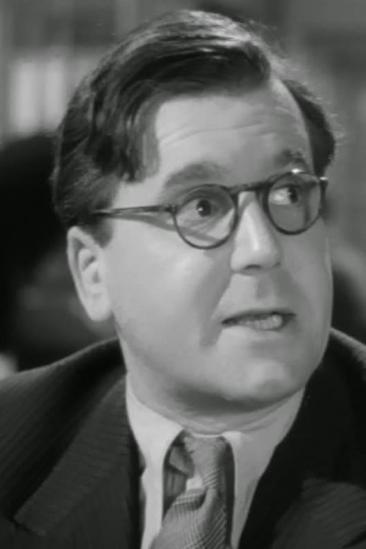 Edward Chapman (13 October 1901 - 9 August 1977) was an English actor who starred in many films and television programmes, but is chiefly remembered as "Mr. Wilfred Grimsdale", the officious superior and comic foil to Norman Wisdom's character of Pitkin in many of his films from the late 1950s and 1960s.

Chapman was born in Harrogate, Yorkshire, England. On leaving school he became a bank clerk but later began his stage career with Ben Greet's Company in June 1924 at the Repertory Theatre, Nottingham, playing Gecko in George du Maurier's Trilby. He made his first London stage appearance at the Court Theatre in August 1925 playing the Rev Septimus Tudor in The Farmer's Wife. Among dozens of stage roles that followed, he played Bonaparte to Margaret Rawlings's Josephine in Napoleon at the Embassy Theatre in September 1934. In 1928 he attracted the attention of Alfred Hitchcock, who gave him the role of "The Paycock" in the 1930 film, Juno and the Paycock. In the same year he also made an appearance in Caste (of which no prints are known to exist). He had a role in The Citadel in 1938 and appeared alongside George Formby in the Ealing Studios comedy Turned Out Nice Again in 1941.

During the Second World War he took a break from acting and joined the Royal Air Force. After training he was posted to 129 (Mysore) Squadron as an intelligence officer. This Spitfire squadron was based at Westhampnett and Debden. The squadron was heavily engaged in combat during this period and many of Chapman's fellow squadron mates were killed in action.

Chapman first starred alongside Wisdom in 1957's Just My Luck in the role of Mr. Stoneway, but the next year in The Square Peg he appeared as Mr. Grimsdale for the first time opposite Wisdom's character of Norman Pitkin. In 1960 he and Wisdom acted together again in The Bulldog Breed, playing the roles of Mr. Philpots and Norman Puckle - Mr. Grimsdale and Pitkin in all but name. Wisdom appeared alone as Norman Pitkin in On the Beat in 1962, while Chapman branched out, starring in the Danish folktale Venus fra Vestø, but Grimsdale and Pitkin were reunited for 1963's A Stitch in Time. Their final performance together was in The Early Bird in 1965, Wisdom's first film in colour. In all, he appeared alongside Norman Wisdom in five films.

After Sir John Gielgud was arrested for "persistently importuning male persons for immoral purposes", Chapman started a petition to force him to resign from Equity. Sir Laurence Olivier reportedly threw Chapman out of his dressing room when he solicited his signature for the petition.

From 1965 Chapman played mostly characters roles on television. His final role was as Mr. Callon for nine episodes of the BBC's seafaring melodrama The Onedin Line between 1971 and 1972. Chapman died of a heart attack in Brighton, East Sussex, England at the age of 75.

Description above from the Wikipedia article Edward Chapman, licensed under CC-BY-SA, full list of contributors on Wikipedia.