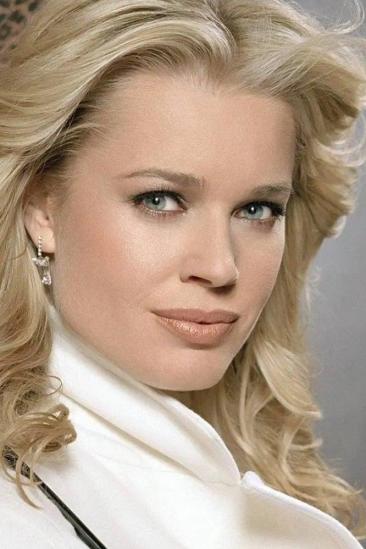 Rebecca Alie Romijn is an American actress. Her father was Dutch-born and worked as a custom-furniture maker. Her mother was American-born, with Dutch and English ancestry, and was a teacher of English. Rebecca attended Berkeley High School where her nickname was the "Jolly Blond Giant", then she attended the University of California at Santa Cruz where she majored in Music, but left in 1995.

She was a natural for modeling, and has posed for Sports Illustrated, Christian Dior and Victoria's Secret, to name but a few. Rebecca first met John Stamos in 1994, at a Victoria's Secret Fashion Show and had her first date with him at Disneyland. They married in September 1998, but have since gotten divorced.

Rebecca's favorite foods are fillet mignon, tuna sashimi and Häagen-Dazs Cappuccino Commotion ice cream. But to keep her weight at a svelte 130 pounds, she stays fit with a rigorous stretching and strengthening routine (her firm body tone is evident when compared to photos of her earlier modeling, where she was very slim but not toned). Rebecca's most famous movie role, so far, was as the shapeshifting Mystique in X-Men (2000), based on the long-running comic book series about teenage mutant superheroes (that Jack Kirby and Stan Lee created in 1962). To play Mystique every day, Rebecca had to start out nude, and then two female makeup artists would apply blue body paint and other stick-on parts for 8 hours a day. Rebecca told Jay Leno on The Tonight Show with Jay Leno (1992) that things like tissue paper would stick to her hips; and, one day, the long hours of wearing sticky paint makeup made her so upset that director Bryan Singer told her to have a glass of white wine and relax. Notwithstanding those technical difficulties, X-Men (2000) was a box-office bonanza, and Rebecca's future in films was assured.