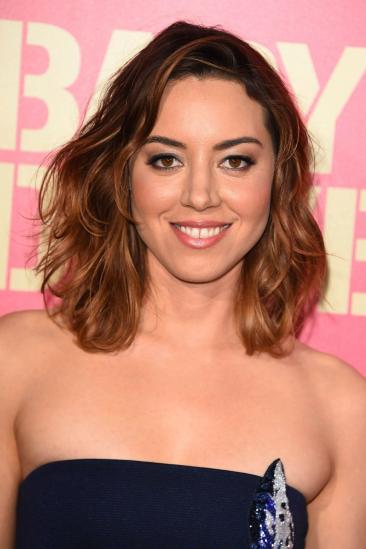 Aubrey Christina Plaza (born June 26, 1984) is an American actress and comedian who has gained popularity with her deadpan-style comedy. She is a cast member on Parks and Recreation portraying the role of April Ludgate, and after appearing in key supporting roles in several movies, played her first leading role in a major film, starring alongside Mark Duplass in the comedy Safety Not Guaranteed in 2012.

Plaza began her career as an intern. After performing improv and sketch comedy at the Upright Citizens Brigade Theater, she appeared in the Web series The Jeannie Tate Show. She later appeared in films such as Judd Apatow's Funny People and Scott Pilgrim vs. the World.

Plaza was born in Wilmington, Delaware, the daughter of Bernadette, an attorney, and David Plaza, a financial advisor. She has two younger sisters, Renee and Natalie, the latter of whom she uses as inspiration for her character April Ludgate on Parks and Recreation.

Plaza was named after the song "Aubrey" by Bread. Her father is Puerto Rican and her mother is of Irish and English descent. Plaza has stated: "I was like the only diverse kid in my high school, and I'm half-Puerto Rican. But yeah, I have a huge family and tons of cousins in Puerto Rico." She participated in productions with the Wilmington Drama League.

Plaza graduated from Ursuline Academy in 2002, and New York University's Tisch School of the Arts in 2006. While at NYU in 2004, Plaza suffered a stroke that caused temporary paralysis and expressive aphasia, but she has fully recovered.

Description above from the Wikipedia article Aubrey Plaza, licensed under CC-BY-SA, full list of contributors on Wikipedia.